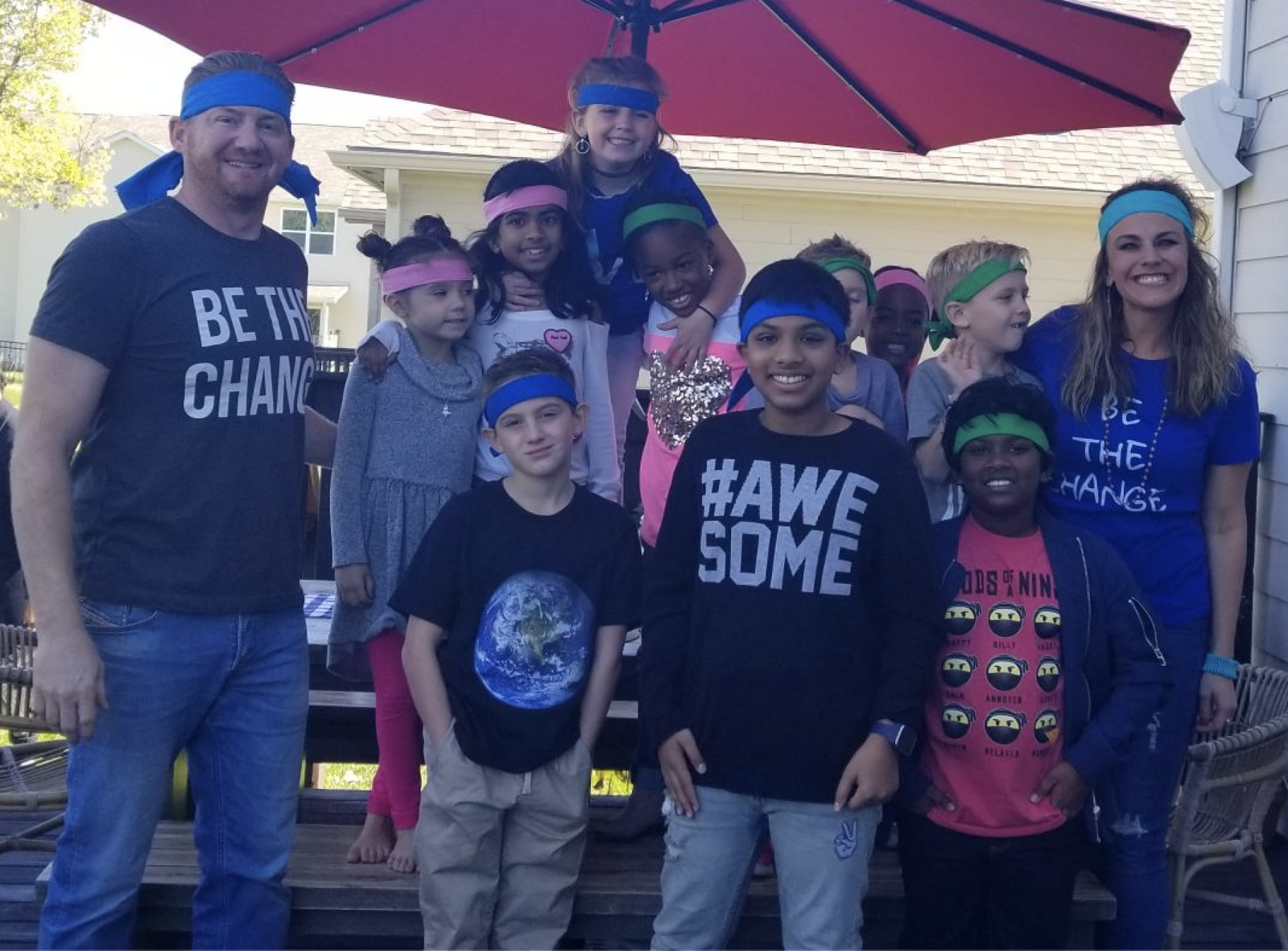 Helping Ninjas was founded by my son, Leo Berry, out of his love for insects and animals and his desire to help them survive.

The story of how, begins with our very important source of food production, our pollinators — bees.

While accompanying Leo’s class on a hay ride at a field trip to a pumpkin patch, I learned something.

What I learned was not only alarming, but it inspired me to learn more and to want to find out what could be done to help. The gal on the farm was showing us a bee colony; she mentioned the rapid decline of bees and that less than 10% were left – in the world!

I looked around at the other parents in the wagon sitting in the hay, and not one of them looked up from their smart phones. But, the children, they were listening intently. Bees were on the endangered species list!

Then the ride continued and we were soon picking pumpkins. Pumpkins that bees had pollinated to ensure growth, so that we could be enjoying this activity.

Later that night, I couldn’t get those bees out of my head.

Bees, endangered? How was this possible? And, how had I not heard about it?

I knew a little about our ecosystem, and I had enough sense to realize that this was not good. I discussed this with my husband. He was as shocked as I was. I voiced my concern that this topic was not on the nightly news and he suggested that I “Google it.”

We need bees to live, right?

And the answer to that question is—yes. Without bees and their pollination, we will not be able to produce high yields (about 2/3 of all food). And without food, as we all know, we can’t survive.

The next day afterschool, Leo and I began discussing what I had discovered. His interest was obvious. As a mother I was excited that my seven-year old was asking questions.

A door for communication opened.

My son was demonstrating an interest in something other than playing video games or having a “nerf war” with his friends. I could see the eagerness in his eyes. It was a magical moment. Leo wanted to learn more, and he couldn’t get enough.

I was able to  answer some of the questions, and some of them I could not.

So, to take advantage of his interest in electronics –we turned to the good ole internet again. Together, on the computer, we began researching bees and their endangerment and what this actually meant.

In doing so we also discovered that sharks were endangered.

Sharks too?  I’m thinking this and I will never forget what Leo said.

“Mom, um,” Leo looked up, “if sharks go extinct, we will die. They are at the top of our food chain.

I was stunned. Stunned that he connected the dots, and even MORE so, that he was right. Bees at the bottom of the food chain. Sharks at the top. Both species VERY, VERY important. But what I could not wrap my head around was why were more people not talking about this?

His love for animals and insects along with our conversations and research sparked Leo’s passion for science. He wanted to learn more, and he wanted to help.

Learning about endangered species inspired a genuine concern to help. Leo showed a sincere interest to share with other children what he had learned.

After researching endangered species, impacts of pollution on our environment – and how nature works — he turned to me, very matter of factly said, “Mom, we have to help.”

“We have to help save the world.”

“I have to tell my friends.”

“That is so sweet. You don’t think they know this information?”

“No, but they need too. Mom—I know! We need to build a website! Then I can tell all of my friends to come on the website so they can learn about this too. We have to help.”

“That is a great idea, Leo. What should we call the website?”

“Um, well, uh, Leo, that might be a little scary for some parents or kids, I see where you are going, like batman, who comes out at night to save people, right?”

“Let’s think of something else, ok? What do you want the website to do?”

“The world. I need to teach my friends how to help the world.”

I smiled. I knew.

“Leo, then how about…helping ninjas.”

The rest, as they say, is history.

His three younger siblings immediately engaged and together as a family, Leo founded the club—and we invited friends. Together the Helping Ninjas were formed.

A few days later after this initial conversation, I had the idea of the Helping Ninja Emoji.  (Which now is being used as Helping Ninjas, Inc. Not-For-Profit logo.)

It appeared in almost a vision-like image…

I was sitting at the computer, attempting to build Leo’s new website, re-learning how to use a website building application, testing out my old skills from college.

(I majored in Integrated Strategic Communications and English, University of Kentucky, minored in Public Relations and Creative Writing so I had a little experience in web design and content writing, granted I hadn’t used them in a decade or so. (I retired from a successful eight years of owning and operating a Pilates studio) and had been a stay at home mom for the last six years).

It just came to me. A globe. A ninja headband. An emoji.

I drew it on a piece of paper and showed Leo.  He smiled. My then four-year old year old daughter, Layla drew about 50 versions that day with her crayons. I knew that children would love it – they love emojis!

I knew in that instance, it wasn’t just a good idea, it was a great idea. The whole concept of Helping Ninjas — it was necessary. Needed.

We were going to teach children to be highly skilled at helping and inspire others to want to help through education, awareness and outreach.

My son wanted me to help him share this knowledge with everyone, so they could in turn help animals, our planet, and well, each other!

I was going to make it my mission to show my children the happiness that accompanies helping and giving back; that there is no greater joy than what comes from an act of selflessness.

This reminded me of how precious and impressionable our children are, and how our actions shape our future — and I wanted to help bring Leo’s idea to life.

His idea inspired me. And, now I wanted to “be the change.“

Playing over and over in my head were the infamous words, “If you build it, they will come.” A line from a classic, Field of Dreams.

“If you build it, they will come.”

I knew if I built this website, if I helped my son achieve his goal, if we started bringing awareness to important global issues and the importance of teaching it to youth and sharing our ideas and/or opportunities of how to help —  that people would pay attention.

It might inspire another person to do the same. And another, and another.

Any attention is good and the more attention being brought to being kind, helping one another, helping ourselves, healthy living, and connecting the dots – helps nature and helps the planet.

A helping ninja, by definition, is a highly skilled person who excels in the act of helping. So, let us all show our youth what that means. The power of positivity.

Let’s get kids excited, not just about learning, but learning how to help!

To set an example for our youth as well as the urgency – we must teach our youth how to help; we must show them how, and we must provide a reason for them to want to help and give them the means to do so.

Helping Ninjas was created not to be just a website, or just a club, it was created to be a movement.